The Trump administration ordered the expulsion of 60 Russian diplomats on Monday and the closing of the Russian consulate in Seattle in response to the nation’s alleged role in poisoning an ex-spy and his daughter in Great Britain.

The move came in concert with more than a dozen European nations directing Russian diplomats to leave their soil.

“This is the largest expulsion of Russian intelligence officers in United States history,” said U.S. Ambassador to Russia Jon Huntsman, according to The Associated Press.

On March 4, former spy Sergei Skripal and his daughter were attacked with a nerve agent in Salisbury, England, leaving both in critical condition. British authorities determined the agent was Russian in origin.

The White House issued a statement early Monday morning explaining the actions the U.S. was taking.

“Today President Donald J. Trump ordered the expulsion of dozens of Russian intelligence officers from the United States and the closure of the Russian consulate in Seattle due to its proximity to one of our submarine bases and Boeing,” the statement read.

“The United States takes this action in conjunction with our NATO allies and partners around the world in response to Russia’s use of a military-grade chemical weapon on the soil of the United Kingdom, the latest in its ongoing pattern of destabilizing activities around the world,” it continued. 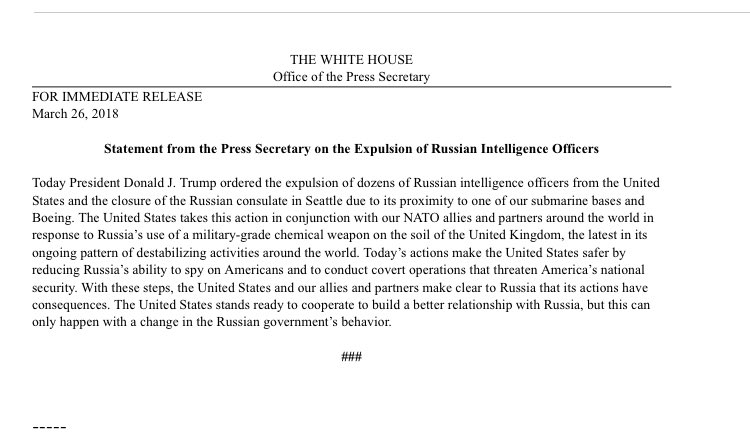 Twelve of the 60 ordered to leave the United States are from Russia’s mission to the United Nations.

“The United States and many of our friends are sending a clear message that we will not stand for Russia’s misconduct,” U.N. Ambassador Nikki Haley said. “Here in New York, Russia uses the United Nations as a safe haven for dangerous activities within our own borders.” 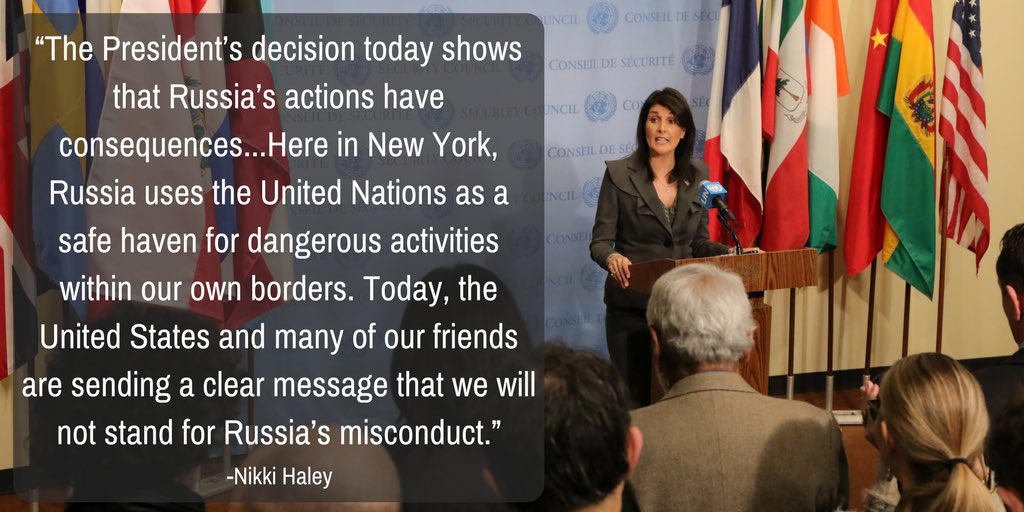 The Trump administration has ordered the Russian consulate in Seattle closed by April 2.

According to the AP, Monday’s directive marked the largest expulsion of Russians in history, eclipsing the 1986 Reagan administration order of the removal of 55 individuals accused of engaging in espionage.

In December 2016, the Obama administration kicked out 35 suspected Russian intelligence operative in retaliation for Moscow’s attempts to influence the U.S. presidential election.

On Monday, multiple European nations stood in solidarity with Britain, as well, in demanding Russians out.

“We remain critical of the actions of the Russian government,” European Council President Donald Tusk said as he announced the actions by 14 European Union countries to expel Russian diplomats, The Washington Post reported. “Additional measures, including further expulsions within the common E.U. framework, are not to be excluded in the coming days and weeks.”

“Germany, France, Italy, the Netherlands, Denmark, the Czech Republic, Finland, Romania, Estonia, Latvia, Lithuania, Poland, Ukraine and Canada all announced that they would expel diplomats or intelligence agents,” according to The Post.

MOSCOW ACTIONS COMING AGAINST THE US?????

Moscow appeared to make light of the U.S. actions, hinting it will be taking retaliatory steps.
Get THIS! The Russian embassy tweeted a poll asking users to vote which U.S. consulate should be closed in their country: Vladivostok, Yekaterinburg or St. Petersburg.

ordered the closure of the Russian Consulate in Seattle @GK_Seattle

. What US Consulate General would you close in @Russia, if it was up to you to decide

Well, I guess on a more serious note the Russian embassy urged the U.S. to help calm the British government. 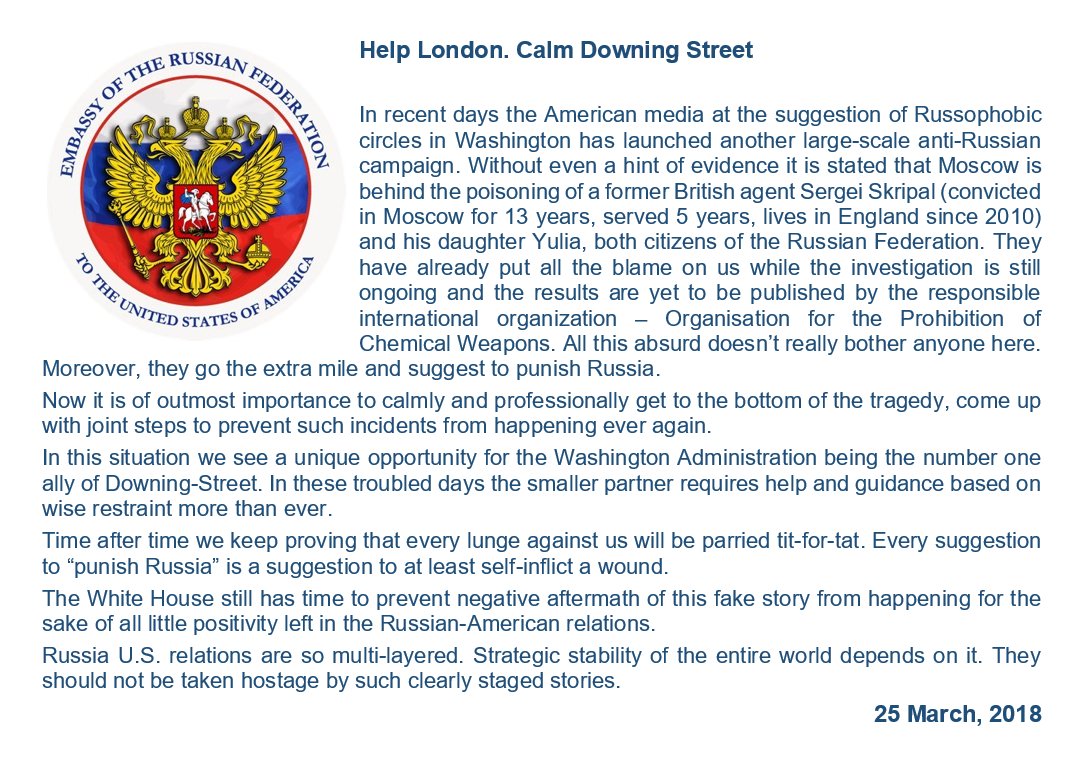 US relations. They should not be taken hostage by clearly staged stories
.

But seriously folks, what did they expect?

IF RUSSIANS DIDN’T ATTACK SERGEI SKRIPAL, WHO DID?

If the Russians didn’t attack former spy Sergei Skripal and his daughter with a nerve agent in Salisbury, England, then who did? I realize these days anyone can make anything look like anyone else did it. Right, Hillary? …just take the case of Seth Rich. We still don’t know who killed Seth Rich?

In addition, we still don’t know why was involved in the largest killing in US history in the Las Vegas shooting, but it was definitely more than one person, as no ONE person, could shoot that many people and that many bullets. I don’t care if your name is Stephen Paddock.

The nerve agent according to the UK was “highly likely” carried out by the Russians. Russia has denied the responsibility for the attack.

The Skripals to this date are ‘heavily sedated’ following their injury by the nerve agent. Both are currently in stable condition but unable to communicate. They are still be treated on the basis to achieve optimal recovery, even though they may never recover from the attack of the nerve agent.

You May Be Balding Good Sir But Not I