It’s no surprise to many Americans the host of Fox News’ “The Kelly File”, Megyn Kelly, has not been on good terms with president-elect Donald Trump for some time. From Megyn Kelly’s comments about Trump calling women “fat pigs”, “dogs” and “slobs” to Trump’s comments about Kelly’s “blood coming out of her eyes, and blood coming out of her wherever” their relationship has been, to say the least, rocky.

This week the 45-year-old Fox News anchor, Megyn Kelly released a new self-help book entitled “Settle For More”. The newly released book is about Kelly’s dealings with Trump and her past boss, Roger Ailes. Kelly’s book shares insights into Megyn’s life as an attorney and her rise in TV journalism. “Settle For More” is about the importance of hard work, self-esteem and perserverance. Unfortunately, for Megyn Kelly, 73-75% of the reviews for Kelly’s “Settle For More” give it only one star.

As of this writing, 73% of the reviews are one-star.

“I want to be as fair as possible here. I think Megyn should have waited a few more years to write a book. To begin with the book is poorly written. Secondly, no matter how you feel towards her (love, like or hate) you can’t help but question why such a strong and educated woman would work for Ailes if he was sexually harassing her and others. I believe her but can not understand why she stayed. Also why her husband didn’t speak up. Regarding her problems with Trump it seems oddly opportunistic of Megyn to focus on events that are she said he said. This book, instead of being an interesting read is suffocating with Me, Me, Me! I’m afraid Megyn may be better suited to a talk show rather than serious news.“

1.0 out of 5 stars Settle for MORE than this trashy narcissistic mess!

Megyn Kelly uses her sex appeal to get to the top & then pivots to being a feminist crusader, bashing men at every opportunity.

Daughter got this on her kindle, read the first …

Daughter got this on her kindle, read the first few chapters. They were nothing special. Not worth buying, that’s for sure. Just another so called Journalist looking for her 15 minutes of fame. Barbara Walters she is NOT.

I have read posted excerpts of this book and I just cannot support such a mean-spirited attack on political and business leaders like this. We are looking at an author suffering from bloated self-importance. Garbage in, Garbage out…Stay away.
1.0 out of 5 starsHorrible

First, this is written as a chopped up movie script way instead of telling the story. Second, Megyn comes across is “all about me” and not very flattering. And last, I’m not sure smearing your current employer is a positive way to go here. Just saying. Save your money. 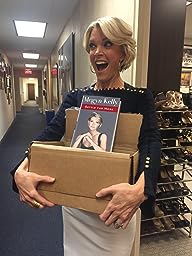 Using Megyn’s own words: “Life is too short to lumber through bad books or bad cocktails.”

Megyn Kelly’s book “Settle For More” includes some pretty shocking revelations about president-elect Donald Trump. Megyn states Trump offered her gifts which included a trip to Mar-a-Lago meant to influence her reporting of the campaign. Kelly also adds “Roger (Ailes, her boss) was talking to Trump daily” and that Trump knew at least one debate question in advance. Turns out that question was Kelly’s pointed question to Trump and his use of language towards women.

As a frequent Fox News audience member, I can honestly say, I thought Megyn seemed to favor Clinton more than Trump in reporting campaign news. Not sure if that was on purpose or if she was just playing “good cop” “bad cop”.

Either way, I certainly believe in the importance of perserverance, hard work and self-esteem but it looks like readers will have to “Settle For More”.