Kim Dotcom has called on Twitter to stop ‘censoring’ tweets, saying he’ll create an alternative to the social network if it continues.

Tired of seeing censorship on Twitter? There may be a solution soon. Kim Dotcom has proposed an alternative to Twitter ‘over censorship of Seth Rich’ tweets.

Tweeting early Saturday, the Megaupload founder urged Twitter’s Jack Dorsey to “stop messing with our free speech” and warning that if Dotcom creates an alternative platform, “Twitter could be toast within a year”.

If you keep messing with our free speech @jack I will build a team to create a Twitter alternative, without censorship. Twitter could be toast within a year. I hear you’re hurting about the Trump presidency. Don’t let your frustration destroy your business. #StopTwitterCensorship

Dotcom had earlier tweeted at Dorsey to ask why Twitter was preventing retweeting on certain tweets. He shared a screenshot of a notice from Twitter claiming a tweet he wished to retweet was“no longer available” despite it still being on the network.

Other Twitter users wrote that they too had experienced similar issues with retweeting, with some accusing Twitter of ‘shadowbanning’ certain users. This is when the person is not aware their account’s reach has been limited, but their followers don’t see their tweets or a warning appears over their tweets. Twitter has denied this practice is in place.

Last year, it  publicized new anti-abuse measures which limit accounts deemed as abusive so their tweets are only seen by their followers. If a follower retweets their tweet, it doesn’t get shown to others.

Hello @jack, quick question. How come @Twitter is stopping its users from retweeting certain tweets that are active and haven’t been deleted? This screenshot is an example. I wanted to help @RealMattCouch to get on the #ReasonableDoubt podcast to talk about #SethRich. Censorship?

I’m asking every good American who follows me to have a look at this CIA whistleblower who claims to have evidence about a massive Clinton & CIA money laundering scheme. He’s in New Zealand and had his life destroyed. Checkout his website. Get him on the radar. Fascinating story. https://twitter.com/harmontweets/status/968549254049415168 …

Then came the responses on Twitter from Doctom’s followers:

PATRIOTS_NEVER_SLEEP@rpnsolutions
Replying to @KimDotcom and 3 others

Been getting a lot of this Kim. And @jack, my tweets haven’t been getting the exposure they used to.

Knowing how leftist Twitter is and how they’ve been operating this far, this whole thread is terrifying and looks like it can only lead to more censorship/purges if conservatives. 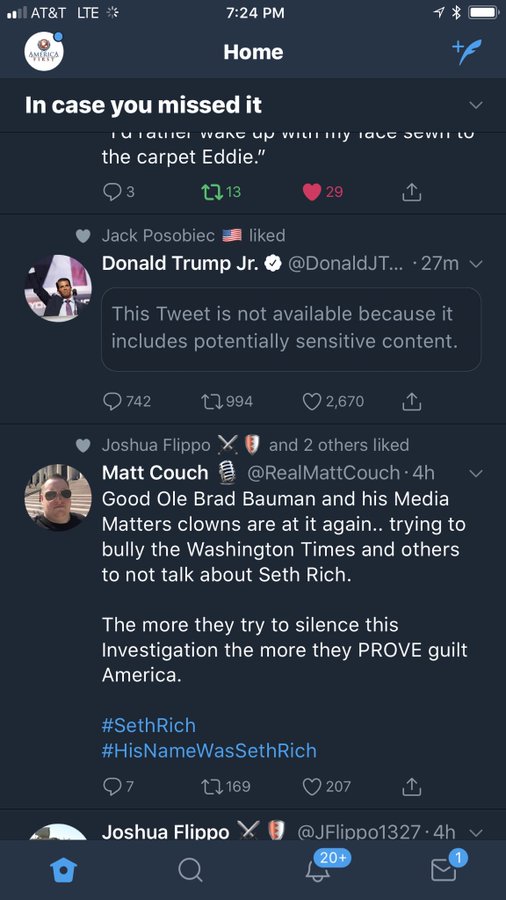 .@JaredBeck banned on Twitter. A father with 2 kids a county away from #Parkland, banned 4 his opinion.

Dotcom had earlier tweeted about Seth Rich, the DNC staffer who was murdered in July 2016. Rumors that his death was in some way connected to the hacking or leaking of DNC emails during the US presidential primaries have circulated since he died. Dotcom maintains he knows who passed the DNC’s emails on to WikiLeaks, and why.

The Seth Rich case just took an interesting turn: “According to Ed Butowsky, an acquaintance of the family, in his discussions with Joel and Mary Rich, they confirmed that their son transmitted the DNC emails to Wikileaks.”

A highly decorated former US Navy Admiral & Chief of the Pacific Fleet with connections to the old guard of the Intelligence community calls the #SethRich murder case a well known cover-up amongst US Intelligence agencies. At the very least this should trigger a new investigation

I’m not sure about Admiral Lyons credibility but if Ed Butowsky confirms under penalty of perjury that the Rich family knew about the involvement of Seth in the DNC leak a Special Counsel must be appointed. Mueller is obviously not interested in evidence that doesn’t say RUSSIA.

My legal team remains firm on their advice that I cannot release details about my interactions with Seth Rich to the public. Blame Mueller for zero progress. For whatever reason he’s not interested in non-Russia evidence. @Wikileaks also wasn’t asked to assist the investigation.

Uninformed people and Clinton lemmings may tell you that the #SethRich DNC whistleblower case is a ‘conspiracy theory’. Simply send them this informative link and help those deep state propaganda victims to understand what a cover-up looks like.

Dotcom told RT many of his followers had shared similar experiences with retweeting, saying that it seems the platform “is actively targeting accounts that talk about the Seth Rich case.”

I know first hand how unethical the US Department of Justice can be. Given how politically charged the #SethRich / DNC situation is my lawyers, as indicated in their letter to Robert Mueller, want me to get immunity so the DOJ can’t concoct another delusional case against me.

I’m shocked. No doubt your show has made some outrageous claims. But that’s free speech. CNN is making outrageous Russia claims daily. Hire a top law firm and sue them. Easy win. In a first step get an urgent Court injunction to stop YouTube from deleting your content / account.

There seems to be a coordinated push by YouTube, Facebook and Twitter to silence conservative voices. These tech companies are run by Clinton supporters and deep state huggers. Russia is taking the Democrats nowhere. The fake news media is dropping in ratings. Desperate measures!

“There is a large number of Twitter users out there, especially Trump supporters, who claim that they sometimes cannot even retweet the tweets of the President,” he added. “I’m thinking this isn’t just a bug. I think Twitter is proactively interfering with free speech because of the political bias of its leadership,” Dotcom said. “And if that is true then the time has come for a Twitter alternative, a neutral platform without censorship.”

Dotcom said he likes the platform and wants to give Dorsey a chance to respond to reports of censorship. “If he can assure us that Twitter won’t violate free speech then I have no desire to create a twitter alternative,” he said. “I like Twitter. It’s a great communication tool that must be protected from the political bias of twitter management or shareholders.”

Kim Dotcom is right! Twitter, YouTube and Facebook are all companies run by liberalists and Clinton supporters. They are gearing up for the midterm elections. As Clinton stated on one occasion that it was social media that caused her to lose the election, or was that Comey, or was that her campaign manager, or was that…..What difference does it make?

How many of you have been censored by Twitter? How many of you would join a new alternative to Twitter if the censorship doesn’t stop? Let us know in the comments.

Want to Watch Dan Crenshaw Put the Smackdown on a ‘Young Turks’ Punk? Me too..…

Ms. Nevada stripped of her crown for supporting Trump: Watch sad VIDEO and find how…