On Thursday, the House passed legislation to overhaul the tax code. The measure passed by a vote of 227-205. Of course you know without even guessing, no Democrat voted for it.

This is BIG LEAGUE! This is one of the top agenda items of the Trump administration, next to repealing Obamacare. This bill will stimulate the economy and returns more money back to the pockets of Americans, especially the middle class.

The House has passed its tax reform package with a final vote of 227 yeas to 205 nays. And while the Republican leadership has ordered the caucus not to gloat about the legislative victory – possibly the biggest so far for President Trump – Paul Ryan and Co. will be able to go home to their constituents and enjoy a relaxing Thanksgiving holiday.

Their colleagues in the Senate won’t be so lucky.

Senate leaders have said they’re working with holdouts like Ron Johnson as well as lawmakers like Bob Corker who are leaning toward voting against the bill in its current form. The Senate Finance is still marking up the bill, adding amendments and making alternations, but leaders say it’ll make it to a floor vote the week after Thanksgiving.

Senators Marco Rubio and Mike Lee have wanted to see a bigger expansion of the childcare tax credit. Johnson has said more of the tax relief should go to LLCs via the pass-through rate and less generous breaks should be given to corporations.

Here’s a list of the Republicans who voted ‘nay’. 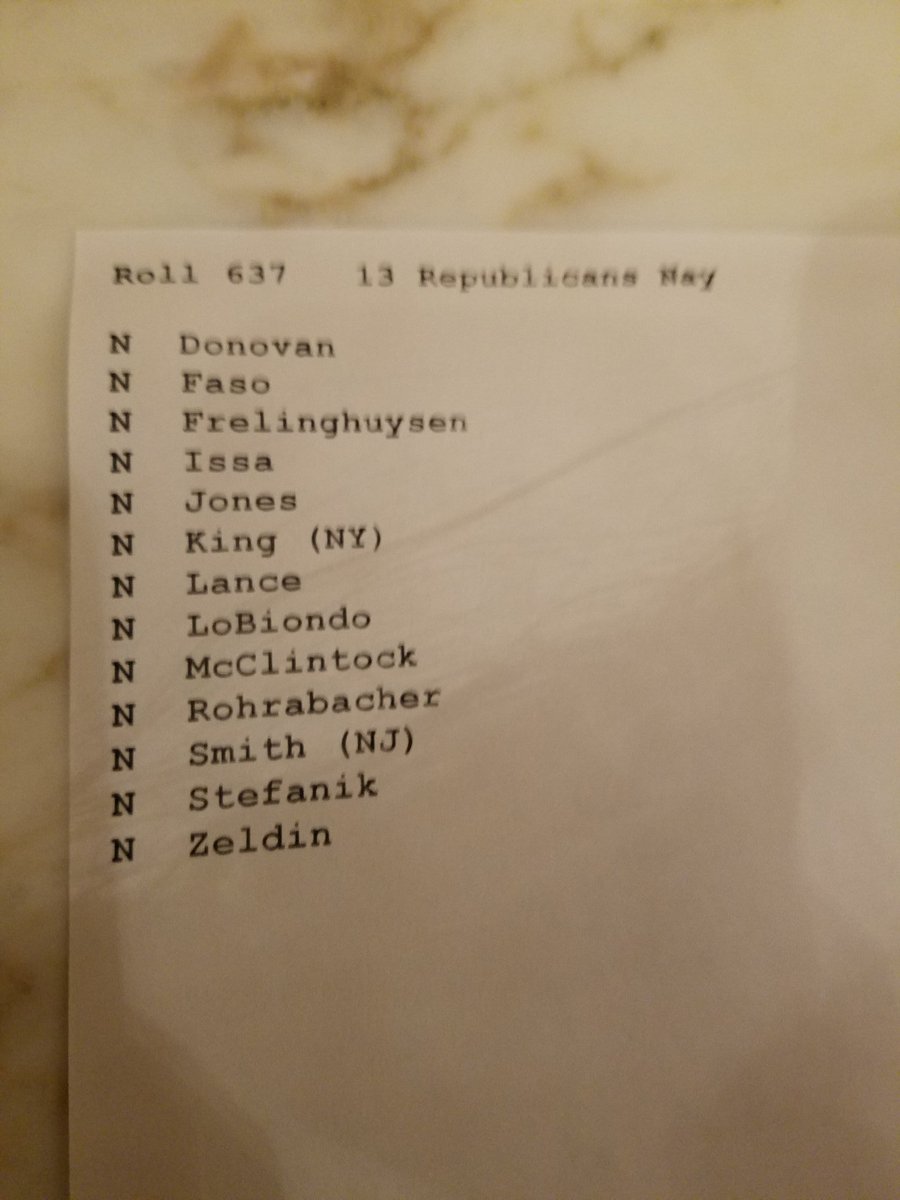 GOP no votes on the tax bill

Following a pep talk by President Donald Trump that went swimmingly according to media accounts, House Republicans are preparing to vote on their version of a tax-reform package that will slash the corporate tax rate, cut taxes for individuals and reduce the number of tax brackets.

The House on Thursday passed legislation to overhaul the tax code, moving Republicans one step closer to achieving the top item on their legislative agenda.

The measure was approved by a vote of 227-205. No Democrats voted for the bill, while 13 Republicans broke ranks to oppose it.

“Passing this bill is the single biggest thing we can do to grow the economy, to restore opportunity and help these middle-income families who are struggling,” Speaker Paul Ryan (R-Wis.) said ahead of the vote.

Once the bill reached the magic number for passage, Republicans in the chamber erupted into applause.

Democrats mockingly joined in, with some singing “na na na na, hey hey, goodbye,” like they did when the chamber passed an ObamaCare repeal bill earlier this year.

Besides Rep. Walter Jones (R-N.C.), who had concerns about the bill’s impact on the debt, all of the GOP no votes came from the states of New York, New Jersey and California.

Passage of the tax bill, which was unveiled just two weeks ago, was relatively drama-free compared to the GOP’s failed effort to repeal ObamaCare earlier this year.

The stakes are high for Republicans, who are feeling pressure to show that they can govern ahead of next year’s midterm elections. The Democratic wave in last week’s gubernatorial and state house elections in Virginia and New Jersey has only added to their anxiety.

GOP leaders are hoping to get legislation to President Trump’s desk by Christmas, an ambitious timeline given the obstacles that are mounting in the Senate.

Ahead of the House vote, Trump visited the Capitol to rally the House GOP conference in support of the bill. The president and his economic advisers have touted tax reform as the key to unlocking economic growth.

The measure approved Thursday would reduce the number of individual tax brackets, slash the corporate tax rate from 35 percent to 20 percent and eliminate a number of tax breaks and deductions.

The Joint Committee on Taxation (JCT) estimated that the bill would lower federal revenues by about $1.4 trillion over 10 years — a key finding, as the Republican budget only allows lawmakers to add $1.5 trillion to the debt during that time.

JCT said that all income groups would see a tax cut on average under the bill in 2019, but that some income groups, particularly those making $20,000 to $50,000, in some future years would see tax increases on average.

House Republicans who have labored for months on the tax bill celebrated the vote on Thursday, saying the GOP is on track to put more money in people’s pockets and spur investment in new jobs.

“For too long, this broken tax code has eroded America’s economic leadership around the world,” said House Ways and Means Committee Chairman Kevin Brady (R-Texas), the chief architect of the legislation.

Democrats denounced the bill, saying it mostly benefit wealthy individuals and corporations while increasing taxes on some in the middle class.

Rep. John Yarmuth (D-Ky.), the top Democrat on the House Budget Committee, brought a giant check to the House floor debate giving $500 billion to “The Wealthiest 1%” from “The American Taxpayers.” The fake check was signed, “Congressional Republicans.”

“Hard-working families get pocket change,” Yarmuth said, holding up a handful of coins for emphasis. “But millions don’t even get that.”

The House bill would eliminate the deduction for state and local income and sales taxes and cap the property-tax deduction at $10,000, which could hurt people in high-tax states like New York, New Jersey and California.

“I just have too many constituents who are going to see their taxes go up or not see the benefit of the tax relief,” Zeldin said.

Senate Republicans have their own tax bill, which is currently being considered by the chamber’s tax-writing committee.

The Senate legislation differs from the House’s in a number of ways. Unlike the House bill, the Senate bill fully repeals the state and local tax deduction, delays the corporate tax cut until 2019 and repeals ObamaCare’s individual mandate.

The Senate’s bill also sunsets tax cuts for individuals after 2025, in order to comply with the “Byrd rule” that the measure can’t increase the deficit after 10 years if it is to pass with a simple majority.

Now Americans look forward to the Senate voting on their plan in a couple weeks. Then it’s on to negotiations. It’s about time the House did something constructive to move this country forward and stimulate our economy. It’s time to as President Trump said over and over again, ‘Make America Great Again’.

New Senator Franken Bombshell: Stated He Was ‘Glad That Homosexual Got Killed’