In the aftermath of the shooting in Parkland, Florida that left 17 dead, ask yourself, do gun-free zones work? I mean ‘gun-free zone’ signs might as well be bright neon lights flashing to criminals. It’s like they shout – Come here! You’re welcome! It’s all clear!

It’s time to stand up and say – these gun-free zones don’t work!  It’s time to DO something different! It’s time for a game changer!

Polk County Sheriff Grady Judd is doing just that! He gave a few opinions of his own regarding how schools might better prepare for such tragic situations.

In what he suggested would be a “game changer,” Judd stated that schools should allow certain “hand-picked” teachers to carry firearms within the confines of school property. 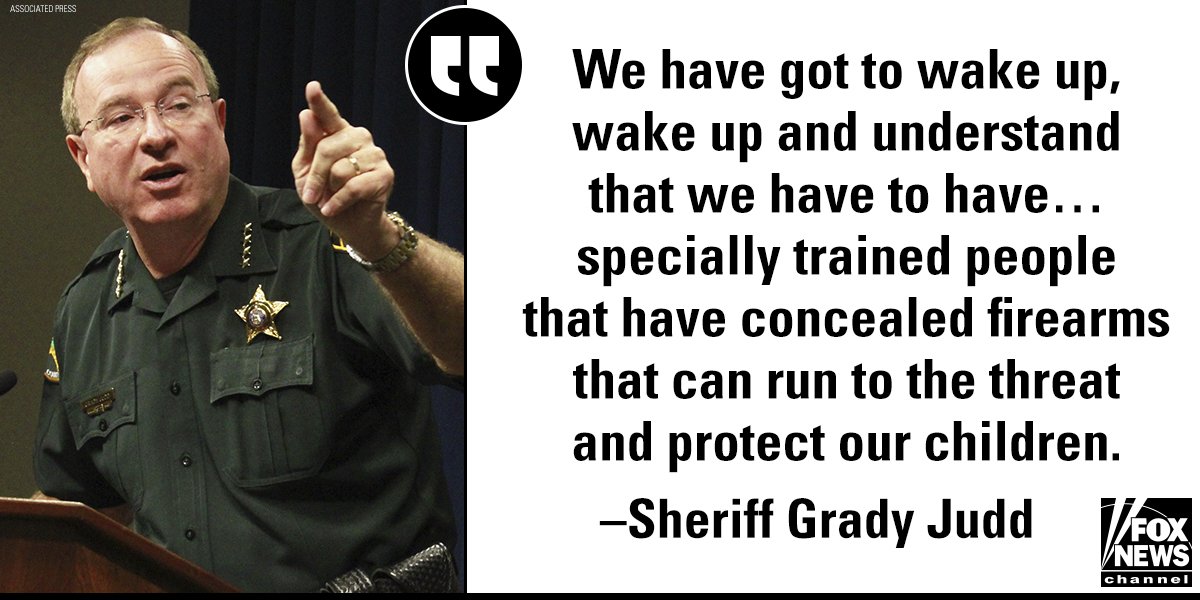 Posted by Fox News to Twitter, the statement has garnered some conflicting responses as the conversation regarding assault rifles and mass shootings takes the nation by storm.

Stoneman Douglas HS students were slaughtered despite ARMED Security Guards at the school during the shooting pic.twitter.com/mVoFw5ewfr

There were literally 2 for 4,000 students. Are you serious right now???

FBI data show that for every person that uses a gun to attack someone there is an equal number of people that use guns to protect themselves. The media just doesn’t tell us about the latter. Guns aren’t the problem people are.

The initiative, suggests Judd, would be to screen and select a certain number of teachers not only with the skill to wield a weapon but who can pass — if not exceed — the psychological requirements set upon Florida’s own State Police officers.

“We have got to wake up,” Judd said. “Wake up and understand that we have to have … specially trained people that have concealed firearms that can run to the threat and protect our children.”

However, Judd’s plan would be easier said than done, as every school and college campus is currently a “gun-free zone.”

Judd argues, however, that criminals and “crazed person(s)” such as Florida’s recent shooter Nikolas Cruz, do not care about or abide by such “gun-free” policies.

The Florida sheriff used examples to further his opinion, highlighting the valiant effort by two Marjory Stoneman Douglas High School coaches who were fatally wounded shielding their students from gunfire.

As The Western Journal recently reported, Judd’s idea may be gaining ground in other states, as Alabama Rep. Will Ainsworth stated that his office is preparing a bill to give public school employees the right to carry guns during school hours.

The representative said that teachers from Marshall County had reached out to him Thursday evening with concerns for their students.

“They wanted to know what we could do to prevent that in Alabama,” said Ainsworth.

“Our kids are literally sitting ducks. You saw the video online of kids having to hide behind desks — they were literally defenseless,” Ainsworth explained. “That’s where this came from.”

The state legislator is planning to introduce legislation that would allow teachers and administrators to be armed at school.

“If a teacher, an administrator, a coach, a principal would like to be armed they can go through a training process,” he explained. “It’s going to be a POST (Peace Officer Standards and Training) process used for law enforcement and they can actually carry a firearm in the school system.”

Ainsworth believes having armed school employees could prevent school shootings or at least the tragic impact of them.

“They are going to be able to protect the kids and a gunman may think twice about going into a school,” he said.

He is planning on working with other Alabama lawmakers to draft the bill and recommends lawmakers across the country do the same. Though, according to WHNT, Ainsworth does not think that the current gun laws need to change.

‘Gun free zones’ especially in schools don’t work! Do you want to help schools, teachers and students defend themselves so you don’t have another shooting like the recent one at Marjory Stoneman Douglas High School in Parkland, Florida? One solution that would help save lives at schools is POST!

Protecting Our Students & Teachers (POST) program offers a plan to mitigate the active shooter threat in schools. POST is based on the highly successful commercial airline “armed pilot” program and has widespread law enforcement support, including the sheriffs in Boone, Kenton, Campbell and Grant counties.

A couple years ago, I had the privilege to interview the creator of the POST program, Joe Kalil. Joe served in the U.S. Army for 10 years before being honorably discharged in 1997.

The POST Program is a common sense, low-cost, and well-designed program created to directly address the threat posed by an active shooter in schools.  The POST program is the most thorough in the country and incorporates multiple, overlapping systems of both prevention and response.  The POST program is based on concepts that were developed for the National Armed Pilots Program (in existence for over 12 years) and incorporates lessons learned by law enforcement in more than ten years of study since Columbine.  POST is a model program starting in the state of Kentucky, but you can adopt any part of the program anywhere in the country.

Think about how different the scenario would have been at the high school in Parkland, Florida had a couple teachers like Andy Feis, 37, an assistant football coach, and Scott Biegal, 35, a geography teacher been armed. They would have been able to use a gun in place of using their body to shield others from oncoming bullets.

But why should teachers have to use their body as shields, when there are programs like POST that work in other schools around our nation. Want to know if any shootings have happened at POST schools?