Who drew first? That’s the unsettling question as more and more apologists, politically-correct fools and appeasers come out decrying that somehow it’s Freedom of Speech at fault for Islamist Terror against cartoonists.

But not our guy Antonio Bronco. He’s a syndicated political cartoonist featured at Liberty Alliance and here at joe For America often. I’ve interveiwed Antonio and not only is he a true-blue liberty-loving American, he has the courage we all wish we had.

“It’s time for the west to wake up to this kind of thing and stop appeasing radical Islam.”
– Antonio Branco, political cartoonist

“We all feel very badly for the cartoonists over there,” says Bronco, and; “I think there’s been a climate set up in the West that has facilitated this kind of behavior – with the politically correct climate set up by our leaders. It’s time for the West to wake up to this kind of thing and stop appeasing radical Islam.”

His  tribute, entitled “We are all cartoonists now” was featured at Fox News yesterday: 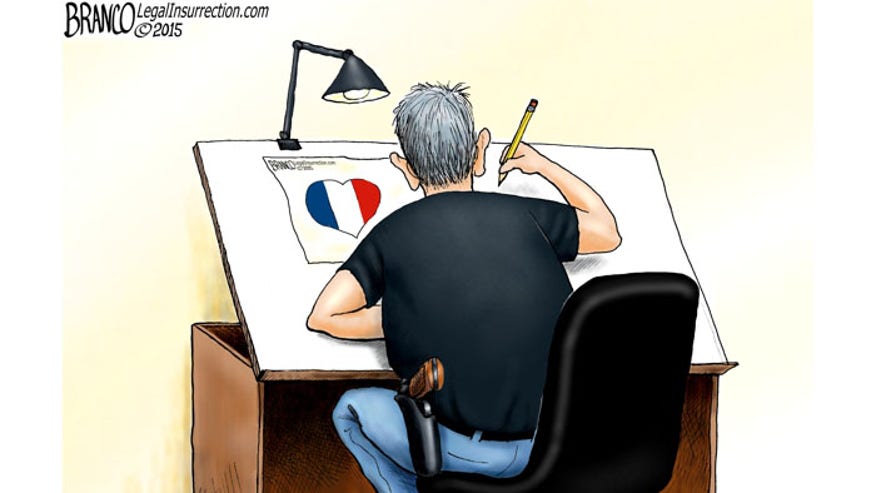 Cartoonists around the world rallied Thursday behind fellow artists killed in a terror attack in Paris because of their satirical drawings mocking Islam’s Prophet Muhammad.

The late-morning attack Wednesday at the newsroom of weekly magazine Charlie Hebdo struck hard at the close-knit international community of journalists whose provocative pictures are aimed at challenging society, culture and politics. Four cartoonists who worked regularly at the Paris publication were among the 12 slaughtered, apparently because the magazine had published images of Muhammad in defiance of Islamic teaching. But cartoonists pointed out that Charlie Hebdo’s mission was pushing boundaries and exposing hypocrisy, and the publication ran images deemed offensive by Christians and Jews, as well.

Cartoonists, including Branco, fought back in the only way they knew, venting their emotions through their work.

Chilean cartoonist Francisco Olea tweeted that Jan. 7 should be declared “World Day of the Caricaturist,” and posted a drawing of a pencil, a marker, an eraser, a pen cover and a geometric triangle, all aligned so as to imitate the shape of a rifle. Above the illustration, a message called on journalists to “take up arms” to show the pen is mightier than the sword.

A cartoon by David Pope at The Canberra Times showed a terrorist wearing a black outfit and carrying a weapon, with the victim he has just killed lying in front of him. The terrorist is saying, “He drew first.” In another image, Brazilian cartoonist Carlos Latuff drew two terrorists shooting at the headquarters of Charlie Hebdo.  The bullets pass through and strike a mosque on the other side, and the caption reads:  “The attack claims another victim.”

Washington Post Pulitzer Prize-winning cartoonist Ann Telnaes drew a Statue of Liberty holding up a pen, while carrying in the other hand a copy of Charlie Hebdo. On its cover, a Muslim man is kissing one of the newspaper’s cartoonists, followed by the comment “L’Amour Plus Fort Que La Haine” or “Love is Stronger than Hate”.

In a statement, the Association of American Editorial Cartoonists noted that Charlie Hebdo’s offices were firebombed in 2011, after it published a cartoon deemed offensive by Muslim extremists. But the publication refused to stop, with top cartoonist Stephane Charbonnier famously telling an interviewer, “I’d rather die on my feet than live on my knees.” Charbonnier, who drew under the name “Charb,” was one of the victims Wednesday.

“Newspapers should not avoid publishing material from the magazine that allegedly incited the incident,” the Association’s statement said. “More freedom of expression and not less demonstrates courage in the face of attacks. Shrinking from a newspaper’s watchdog role only encourages more terror.”

Friend me on Facebook – if you dare. No one turned away.