Donald Trump on Monday called for ‘strong background checks’ in the wake of two mass shootings in El Paso and Dayton and wants Republicans to pair it up with immigration reform in exchange. 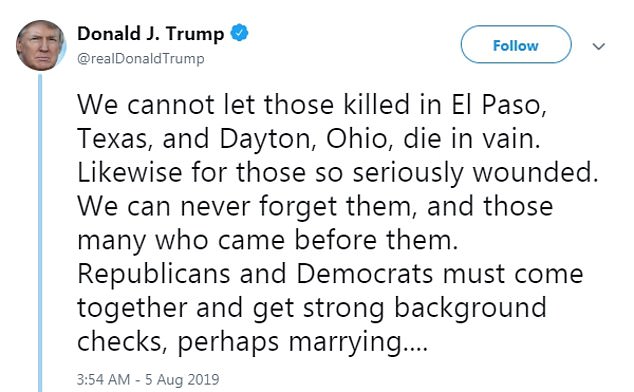 ‘We cannot let those killed in El Paso, Texas, and Dayton, Ohio, die in vain. Likewise for those so seriously wounded. We can never forget them, and those many who came before them,’ the president tweeted.

‘Republicans and Democrats must come together and get strong background checks, perhaps marrying this legislation with desperately needed immigration reform. We must have something good, if not GREAT, come out of these two tragic events!,’ he added.

He also blamed the media, complaining that the ‘fake news’ has contributed to the ‘anger and rage’ in the country.

‘The Media has a big responsibility to life and safety in our Country. Fake News has contributed greatly to the anger and rage that has built up over many years. News coverage has got to start being fair, balanced and unbiased, or these terrible problems will only get worse!,’ he tweeted.

On Sunday, several Democrats running for president blamed Trump’s rhetoric for inflaming tensions around the nation.

‘You reap what you sow, and Donald Trump has been sowing this kind of hatred in our country,’ Cory Booker said on MSNBC.

The president ‘is encouraging this. He doesn’t tolerate it,’ Beto O’Rourke said on CNN.

Meanwhile, Trump did not offer details on what he meant by ‘strong background checks.’

House Democrats passed two pieces of legislation in February to address the mass shootings. One required background checks for all firearms sales, including those purchased online and at gun shows, and the other extended the background check review period to 10 days from three days.

Trump vowed to veto both measures.

‘By overly extending the minimum time that a licensed entity is required to wait for background check results, H.R. 1112 would unduly impose burdensome delays on individuals seeking to purchase a firearm. For this reason, the Administration opposes the legislation,’ the administration said in a statement

After a 2017 shooting in Las Vegas that killed 58 people, the Trump administration banned the rapid-fire devices known as bump stocks.

Democrats have called on Senate Majority Leader Mitch McConnell to cancel the chamber’s August recess and return lawmakers to Washington D.C. to pass H.R.8 or the Bipartisan Background Checks Act of 2019, which would require a background check on all gun sales.

Thus far the Republican-controlled Senate has refused to bring up the measure.

It’s also clear what kind of immigration reform he would want to match up with it. In the past, the president has pushed for funding for his border wall, which would be a non-starter with Democrats.

In December and January the government experienced its longest shutdown in history when House Democrats refused to fund Trump’s border wall. The president eventually folded on the issue.

Trump is scheduled to speak at the White House at 10 am Monday morning where he is expected to address the shootings.

In February 2018, after the mass shooting in Parkland, Fla., that killed 17, the White House said ‘the president is supportive of efforts to improve the Federal background check system.’

In both the shootings in Ohio – where nine died – and Texas – where at least 20 died – the guns were purchased legally, law-enforcement officials said.

Trump said Sunday ‘more has to be done’ to prevent mass shootings.

In his first public statement since two mass shooting rocked El Paso, Texas, and Dayton, Ohio, over the weekend, the president pledged to take action, saying, ‘Hate has no place in our country, and we’re going to take care of it.’

Trump told a small group of reporters that ‘a lot of things are in the works’ before boarding Air Force One in Morristown, New Jersey.

‘We have done much more than most administrations,’ Trump contended. ‘But we’ve done, actually, a lot, but perhaps more has to be done.’

Trump said he has been speaking with Attorney General William Barr Barr and FBI Director Christopher Wray, as well as lawmakers and local leaders, and would be making a lengthier statement on Monday morning.

He indicated his administration is considering additional action, potentially aimed at addressing the problem of mental illness.

‘We have to get it stopped. This has been going on for years,’ Trump said alongside first lady Melania Trump. ‘So thank you very much, and I will be making a statement tomorrow at about 10:00, and I’ll see you there.’

The president answered a single question from reporters on the tarmac in New Jersey, where he spends his summer weekends, related to his admission that more more must be done to prevent gun violence. He did not outline specific action he plans to take.

He brought up mental illness, saying the shooters, both white men in their early 20s, were deranged.

‘But this is also a mental illness problem. If you look at both of these cases, this is mental illness. These are really people that are very, very seriously mentally ill,’ he stated.

Trump’s acting chief of staff, Mick Mulvaney, on Sunday morning called them ‘sick’ killers, as he pushed back on claims that Trump inspired a racist manifesto that appeared online after the alleged El Paso shooter’s bloody rampage.

‘I blame the people who pulled the trigger,’ Mulvaney declared on ‘Meet the Press’ hours after a second gunman opened fire in Ohio. ‘Goodness gracious, is someone really blaming the President? These people are sick.’

Democrats vying for Trump’s job were flocking to Sunday morning news programs – and social media – at the time of Mulvaney’s comments to decry white nationalism. They were also linking the problem to Trump, who one 2020 Dem said ‘encourages the kind of violence that we’re seeing’ with his border policies and conduct.

‘I am anguished over reports that the shooting suspect in El Paso posted a manifesto that included rants about a ‘Hispanic invasion’ before the attack,’ Nadler said in a statement Sunday. ‘This manifesto appears to echo the same anti-immigrant sentiment that permeates the language espoused by President Trump.’

Nadler conceded that the shooters bore sole responsibility for their actions but said Trump was not blameless.

‘Ultimately it is the perpetrators who bear responsibility for their heinous acts of domestic terrorism, but President Trump’s racist rhetoric has stoked the flames of hate and white supremacy, and increased the likelihood that people will commit mass murder based on these evil notions,’ he continued, calling on Trump to ‘stop his racist rhetoric that has the effect of encouraging mass murder.’

Trump had sent his prayers to residents of El Paso and Dayton on Sunday morning, after both cities were wounded by gun violence over the weekend, but he had not spoken camera, despite finding time to attend a wedding Saturday evening at his New Jersey golf property.

He said in a Sunday afternoon update that federal government buildings, and the White House, would be honoring the 29 killed in both shootings by lowering the flag to half-mast.

He said the White House flag would fly at half-staff through Thursday, August 8.

‘Melania and I are praying for all those impacted by this unspeakable act of evil!’ the president said.

The White House said in statements that Trump was being updated on the shootings, and the president lauded the response of state law enforcement in Texas and Ohio.

‘The FBI, local and state law enforcement are working together in El Paso and in Dayton, Ohio. Information is rapidly being accumulated in Dayton. Much has already be learned in El Paso. Law enforcement was very rapid in both instances,’ he said.

He on Saturday night condemned the El Paso shooter, claiming the 21-year-old was a hate-filled coward.

‘Today’s shooting in El Paso, Texas, was not only tragic, it was an act of cowardice,’ he posted. ‘I know that I stand with everyone in this Country to condemn today’s hateful act. There are no reasons or excuses that will ever justify killing innocent people. Melania and I send our heartfelt thoughts and prayers to the great people of Texas.’

Several 2020 Democratic presidential candidates claimed the president is responsible for the killer’s motivation of this violence.

Contenders Beto O’Rourke, who is from El Paso and represented the city when he was a U.S. congressman, Pete Buttigieg and Cory Booker said in appearances on CNN’s ‘State of the Union’ that Trump is a white nationalist.

‘We have a problem with white nationalist terrorism in the United States of America today,’ O’Rourke said. ‘These are white men motivated by the kind of fear that this president traffics.’

He added, ‘So again, let’s be very clear about what is causing this and what the president is: he is an open, avowed racist and is encouraging more racism in this country.’

Buttigieg, the mayor of South Bend, Indiana, said Trump is ‘condoning and encouraging white nationalism,’ at the very least.

New Jersey Senator Booker was more direct, claiming that Trump is responsible for the shootings that cumulatively resulted in 29 deaths this weekend.

‘I turned my attention to the person who is leading this country, who is, in my opinion, in this moral moment, who is failing. That at the end of the day, especially since this was a white supremacist manifesto, that I want to say with more moral clarity that Donald Trump is responsible for this,’ Booker said Sunday.

Mulvaney ripped into Booker, who’d also appeared on NBC, just before him.

He said that Trump’s first call after the shooting was to Barr, who he said the president implored to look into potential actions the administration could take to curtail future gun violence.

‘So, yes he feels the same way that you do, he feels the same way that everybody watching the show, apparently with the exception of Cory Booker and some people on your panel, which is saddened and angry,’ he said of their charges. ‘And that’s where we are this morning as a country and that’s what we should be talking about. Not whether or not it gives one party or another a leg up in the next election.’

In an El Paso Walmart on Saturday, 21-year-old Patrick Crusius allegedly opened fire, killing 20 and injuring another 26 more. Reports emerged in the hours afterward that he told law enforcement when he was apprehended that his goal was to kill as many Mexicans as possible.

A 2,400-word manifesto also appeared online that was likely authored by Crusius and explains why the shooting occurred. It essentially claims that he was motivated to stop immigrants from repopulating with whites and overtaking America.

Early on Sunday morning, another shooter, identified as 24-year-old Connor Betts, opened fire on a popular street in an entertainment district in Dayton, Ohio.

That shooter killed nine people and injured more than two dozen other bystanders. He was shot dead when law enforcement responded to the open fire.

The motivation behind the Ohio shooting remains unknown.

Chicago Mass Shooting Happened This Morning. Where Is The Democrat and Media Outcry?