So much for supporting the 2nd Amendment and our Constitution. This is more about not being sued because they sold a gun to the Parkland, Florida shooter Nikolas Cruz.

Back in 2012, in the aftermath of the Sandy Hook shooting both Walmart and Dick’s Sporting Goods announced they would stop the sale of assault rifles, if only temporarily.

Fast forward 5 years….Dick’s – one of the nation’s largest sports retailers – says that it is immediately ending sales of all assault-style rifles in its stores, according to the NYT.

NYT adds, “the announcement, made two weeks after the school shooting in Parkland, Fla., that killed 17 students and staff members, is one of the strongest stances taken by corporate America in the national gun debate. It also carries symbolic weight, coming from a prominent national gunseller.”

Edward Stack, the 63-year-old chief executive of Dick’s whose father founded the store in 1948, is deliberately steering his company directly into the storm, making clear that the company’s new policy was a direct response to the Florida shooting.

“When we saw what happened in Parkland, we were so disturbed and upset,” CEO Edward Stack told NYT in an interview. “We love these kids and their rallying cry, ‘enough is enough.’ It got to us.”

He added, “We’re going to take a stand and step up and tell people our view and, hopefully, bring people along into the conversation.”

The company also proceeded to tweet a series of statement explaining its stance:

We at DICK’S Sporting Goods are deeply disturbed and saddened by the tragic events in Parkland. Our thoughts and prayers are with all of the victims and their loved ones. http://d.sg/RTC

But thoughts and prayers are not enough. We have to help solve the problem that’s in front of us. Gun violence is an epidemic that’s taking the lives of too many people, including the brightest hope for the future of America – our kids. http://d.sg/RTC

We deeply believe that this country’s most precious gift is our children. They are our future. We must keep them safe. Beginning today, DICK’S Sporting Goods is committed to the following: http://d.sg/RTC 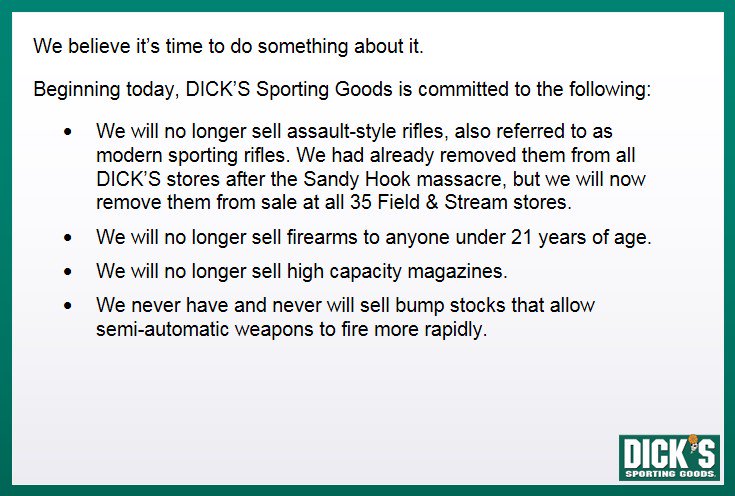 At the same time, we implore our elected officials to enact common sense gun reform and pass the following regulations: http://d.sg/RTC 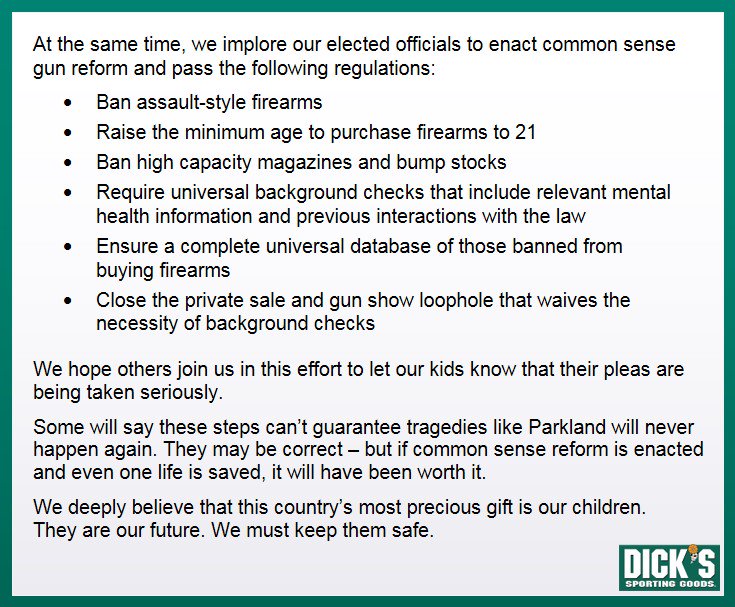 Of course, it is unclear what financial impact the decision will have on Dick’s business, the NYT notes. Neither Dick’s nor its competitor, Cabela’s, now owned by Bass Pro Shops, have broken out firearm sales in their financial reports. But last August, Dick’s shares plummeted after it said weak results from its hunting segment resulted in its missing Wall Street’s second-quarter earnings estimates.

Stack said he hoped that conversation would include politicians. As part of its stance, Dick’s is calling on elected officials to enact what it called “common sense gun reform’’ by passing laws to raise the minimum age to purchase guns to 21, to ban assault-type weapons and so-called bump stocks, and to conduct broader universal background checks that include mental-health information and previous interactions with law enforcement.

Stack said the retailer began scouring its purchase records shortly after the identity of the suspected Parkland shooter, Nikolas Cruz, became known. The company soon discovered it had legally sold a gun to Mr. Cruz in November, though it was not the gun or type of gun used in the school shooting.

Stack said Dick’s remained a staunch supporter of the Second Amendment and will continue to sell a variety of sport and hunting firearms. Although he has never been a member of the N.R.A., Mr. Stack said he is, in fact, a gun owner and enjoys trapshooting clay targets.

But when it comes to selling guns to individuals under 21 years of age or stocking assault-style rifles, Mr. Stack said his company was done. “We don’t want to be a part of a mass shooting,” he said.

That decision raised rounds of discussions with top executives inside the company as well as the directors, all of whom backed the decision to take a stance, said Mr. Stack according to the NYT.

As noted above, this is not the first time Dick’s has made changes in response to a school massacre. In 2012, after the shooting at Sandy Hook Elementary School, Dick’s removed assault-style rifles from its main retail stores. But a few months later, the company began carrying the firearms at its outdoor and hunting retail chain, Field & Stream.

This time, Mr. Stack said, the changes will be permanent.

As of Wednesday morning, the company said all AR-15s and other semiautomatic rifles would be removed from its stores and websites.

It’s called ‘Out of business’.

When Dicks, decided to openly lobby for the infringement of the inalienable rights of Americans they lost customers especially those belonging to the NRA and/or in support of the Constitution and the 2nd Amendment.

This whole gun-grabbing PR stunt is now being funded by the leftist and the liberals groups of none other than Soros himself.

$180,000 Payout To 3 Women For Being Forced To Remove Hijab For Mugshot