Once again the NFL shows it’s true colors by turning down an Amvets ad for the upcoming Super Bowl LII.

According to the Army Times, the congressionally chartered veterans association AMVETS was denied the opportunity to run a $30,000 ad in the official program of Super Bowl LII that would have implored players and others to stand for the anthem.

The full page ad would have featured service members patriotically saluting the flag along with the hashtag “#PleaseStand.” 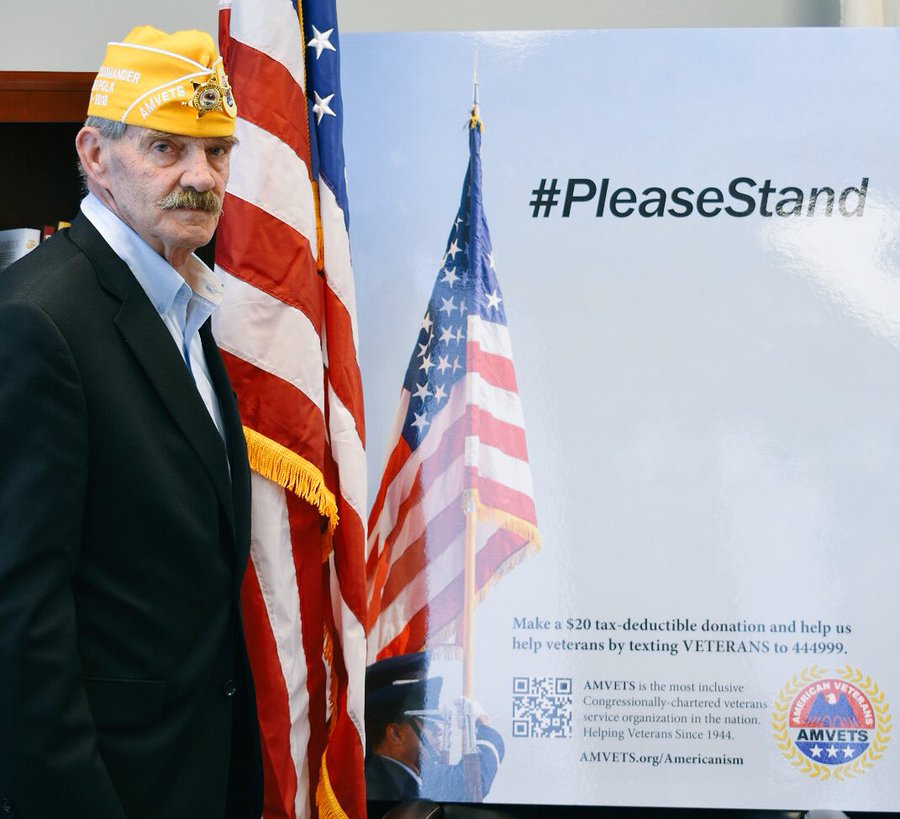 .@AMVETSHQ will NOT tolerate the @NFL refusing #Veteran right to free speech. We fought for it! #PleaseStand#SuperBowl

AMVETS leaders said that the league had rejected the advertisement but had not offered a reason why.

The group is calling the move “corporate censorship.”

“Freedom of speech works both ways,” AMVETS National Commander Marion Polk told Army Times. “We respect the rights of those who choose to protest, as these rights are precisely what our members have fought — and in many cases died — for.”

“But imposing corporate censorship to deny that same right to those veterans who have secured it for us all is reprehensible and totally beyond the pale.”

“It’s a simple, polite request that represents the sentiment of our membership, particularly those whose missing or paralyzed limbs preclude standing,” wrote National Commander Marion Polk in a letter to NFL Commissioner Roger Goodell.

The NFL gave a reason for the ad’s rejection, although please be aware that if you have food and/or drink in your mouth at the present moment, Conservative Tribune is not responsible for any damage you may do to your computer, phone and/or internet device upon spitting it out.

NFL Vice President of Communications Brian McCarthy told the Army Times in a statement that the game program “is designed for fans to commemorate and celebrate the game, players, teams and the Super Bowl. It’s never been a place for advertising that could be considered by some as a political statement.” (Emphasis ours.)

What a TOTAL bunch of BS!

So, just so we’re clear here: The NFL has made it plainly manifest that it has no intention of enforcing respect for the national anthem out of purported respect for the freedom to express a political statement, even though it ostensibly means its players are using the corporate entity that is the NFL (and its partners) to express that statement.

However, when a congressionally chartered group expresses its opposition to that statement and is willing to pay the going rate for an advertisement to say so, the NFL says that the game has “never been a place” for that kind of thing.

And if you still want to use the argument that what players do on the field is different from advertising, it turns out the Super Bowl has “been a place” for that kind of thing when it comes to corporate promotion. Just last year, 84 Lumber ran an infamous ad during the Super Bowl that excoriated opponents of illegal immigration, which was one of a slew of Super Bowl ads with (uniformly liberal) political themes that viewers were treated to.

Maybe the NFL and or Brian McCarthy can explain to Americans how THIS 84 lumber ad is NOT political! Come on man!

“It’s never been a place for advertising that could be considered by some as a political statement,”

Seriously?! Give me a frickin’ break!

Oddly enough, McCarthy noted that an ad from a different veterans group, the Veterans of Foreign Wars, that reads “We Stand for Veterans” will be in the program. He also said AMVETS was asked to change the text to “Please Stand for Our Veterans” but didn’t respond in time for printing.

That’s a rather dubious claim to this observer; a hashtag is unacceptable but that proposed text wasn’t? And by the way, that defense also completely contradicts what McCarthy said about political statements, which leads one to believe this is being handled in the same quarter-assed reactive way the NFL has handled everything about this controversy: trying to kind-of-sort-of mollify angry veterans, first responders and other patriotic fans without actually having to take any sort of concrete stand against those actively disrespecting them.

What it boils down to is, the NFL believes that politely asking people to stand for the Star-Spangled Banner is akin to making a political statement?

The NFL has been rocked by national anthem protests throughout the season — leading to a massive decline in television viewership and game day attendance. Still, the NFL and most team owners refused to order players to stand for the national anthem.

Instead, the commissioner and many owners shamefully turned a blind eye as football players took a knee and disrespected not only the flag, but the brave men and women defending our freedom.

It’s becoming increasingly clear that the NFL’s disdain for American patriotism is not just isolated to the gridiron. It’s apparently infested the front office.

“Veterans are good for more than just military aircraft flyovers, photo opportunities during halftime, or props to sell camouflage-style NFL apparel; although, the NFL’s stance on not allowing the veterans’ unfiltered voice to be heard says otherwise,” Polk wrote to Goodell.

As Americans we should all support Amvets and help them to make their statement #PleaseStand to go far and wide across all of America.

If the Amvets ad is not allowed, Americans should send a clear message back to the NFL #BoycottTheSuperBowl

Kaepernick Slams ‘US Government’ For Stealing From ‘Indigenous People’ At…

FAIL: Not A Single NFL Team Has Called Colin Kaepernick Since Underwhelming Workout