American Champion: “I Will NOT Wear A Hijab And Support Women’s Oppression”!

If you were the reigning U.S. Champion of Chess and you were invited to participate in the World Championship in Iran, would you wear the hijab?

Who is Nazi Paikidze? Well she is the 2016 US Women’s Chess Champion. She is originally from Russia. She started working with a professional coach at age 6. By 9, she won her first international tournament. In 2008, she trained with a Grandmaster and in 2010 became a Woman Grandmaster, and in 2012 an International Master. Then she moved to Baltimore, MD, joined the nation’s best collegiate chess teams at UMBC and changed her FIDE to USA in 2014.

“By participating, I would be forced to submit to forms of oppression designed specifically for women,” Paikidze told Marie Clare magazine. “It sets the wrong example, particularly for young girls interested in chess.”

Nazi Paikidze is the reigning U.S. chess champion, but when the Iranian government told her she had to wear a hijab, the Muslim head veil, and restrict contact with men in order to compete in the world competition hosted by Iran this year, she refused. The “morality laws” were supported by FIDE, the international organization that coordinates the world chess championship event.

“By participating, I would be forced to submit to forms of oppression designed specifically for women,” Paikidze told Marie Clare magazine. “It sets the wrong example, particularly for young girls interested in chess.”

“I will NOT wear a hijab and support women’s oppression.” She told the founder of a group organizing against Iran’s hijab laws. “Even if it means missing one of the most important competitions of my career.”

When an Iranian chess player criticized her boycott saying that the tournament were important for women in Iran and presented them with an opportunity for show their strength, Paikidze appeared to respond on her Instagram account to the charge.

Paikidze said the issue runs deeper than a headscarf.

“I think it’s unacceptable to host a WOMEN’S World Championship in a place where women do not have basic fundamental rights and are treated as second-class citizens,” she has said in an Instagram post. “For those saying that I don’t know anything about Iran: I have received the most support and gratitude from the people of Iran, who are facing this situation every day.”

A message to the people of Iran: I am not anti-Islam or any other religion. I stand for freedom of religion and choice. I’m protesting FIDE’s decision not because of Iran’s religion or people, but for the government’s laws that are restricting my rights as a woman.

The world chess championship began February 10th and will continue until March 5th. For boycotting the event, Paikidze forfeits the opportunity to win over $100,000 in award money.

She posted this tweet during while the competition continued without her: 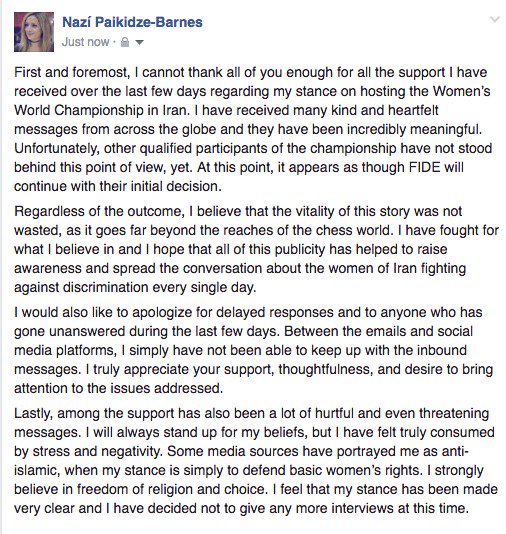 Thank you all for your support!

Nice job Paikidze! That’s what I call a heart of an American and a CHAMPION for all women of all ages!

#OneThingIHaveLearned People will criticize you no matter what you do. Stay true to yourself & do what’s right. Haters always gonna hate.

Liberal Media Did THIS To Melania Trump! The President Will Not Be Pleased!

AOC Has a New 2020 Primary Challenger: Daughter of Cuban Immigrants and Ex-CNBC…

BACK TO COURT: Jussie Smollett Has Been Indicted AGAIN for Fake Attack In Chicago!