The 98-year-old, Sister Jean, chaplain for Loyola’s men’s basketball team is delightfully charming and perhaps good luck for the No. 11 seed Ramblers – who emerged from two nail-biter games to advance to first the Sweet 16, and then on to the Final Four in their latest 78-62 win against Kansas State in the NCAA Basketball Tournament during March Madness.

There’s always seems to be an underdog in March Madness in the NCAA basketball tournament. This year is seems to be no different as fans across America have been rooting for 11th seed, Loyola-Chicago Ramblers.  But the Ramblers have more than an underdog basketball team with talent. They have one of the most tweeted-about persons on their side…a 98-year-old nun named Sister Jean.

Sister Jean Dolores-Schmidt, BVM, is the chaplain of the Loyola University Chicago Men’s Basketball team, and the unlikely breakout star of the college tournament.

Sister Jean burst onto the scene when her beloved Ramblers upset the University of Miami in the first round of the tournament with a down-to-the-wire three-point basket.

Following this win, Twitter featured Sister Jean in a Twitter moment, and she received shout outs from high profile accounts including ESPN and former President Barack Obama. The New York Times also ran a profile on her.

SISTER JEAN: “… if you don’t have confidence in faith, then you might as well not be playing.”

Sister Jean leads the team in prayer before each game, and she prays for her players to be safe, for the referees to be fair, and for God’s assistance during the game. She also admitted to praying for the opposing team, but “not as hard.”

On Good Morning America on Tuesday, she shared specifically what she says to them.

“We meet outside the locker room, in the concourse, wherever the place where we are helps us to do that. And I say a prayer, but sometimes there’s a little more than talking to God in the prayer.

“But I do begin with: Good and gracious God, today, we hope to win this game. We ask to give us courage. We already have the confidence. We’re focused, we know we want to work hard. At the end of the game, we want to be sure that when the buzzer goes off that the numbers indicate that we get the big W. I pray for the other team — perhaps not as hard. But that’s what people tell me, but we have God on our side. And these young men have great faith, and if you don’t have confidence in faith, then you might as well not be playing.”

But how is she handling her newfound fame? She continued:

“I’m just having a lot of fun. It seemed to mushroom all of a sudden. I really don’t know how all this happened. But I kept getting emails and telephone calls — people from California to the East Coast have sent me emails. People I taught over 60 years ago in the elementary school. It’s just brought so many happy memories to me, and I’m really happy to be saying good morning to all of America today.”

Sister Jean provides more than just spiritual support for the team: in 2011, when the Ramblers hired Head Coach Porter Moser, she presented him with a stack of scouting reports for each of his players. She still compiles notes on Loyola-Chicago’s opponents and will warn the team about different players during their pregame huddle. Until she broke her hip this past November, Sister Jean had only missed two home games over the past 23 years–and still followed the team on an iPad while she was recovering from surgery.

“She’s like another coach,” guard Donte Ingram told the Chicago Tribune. “[In my first ever game], it caught me off guard. I thought she was just going to pray. She prayed, but then she starts saying, ‘You’ve got to box out and watch out for 23.’”

Sister Jean was asked how she felt about being a national celebrity. She promptly took her interviewer to task: “Really, if I can correct you, international,” she joked.

Who really wants to argue with the power of prayer. As Sister Jean says, “these young men have great faith, and if you don’t have confidence in faith, then you might as well not be playing.”

Not only does Sister Jean sport some great shoes – “All Sister Jeans”….

..which are almost as good as some ‘Air Jordans’ from Chicago…but probably not quite yet reaching or selling at Jordans’ numbers…

Sister Jean also has her OWN bobblehead… over 1,500 have already been pre-ordered through the National Bobblehead Hall of Fame and Museum. 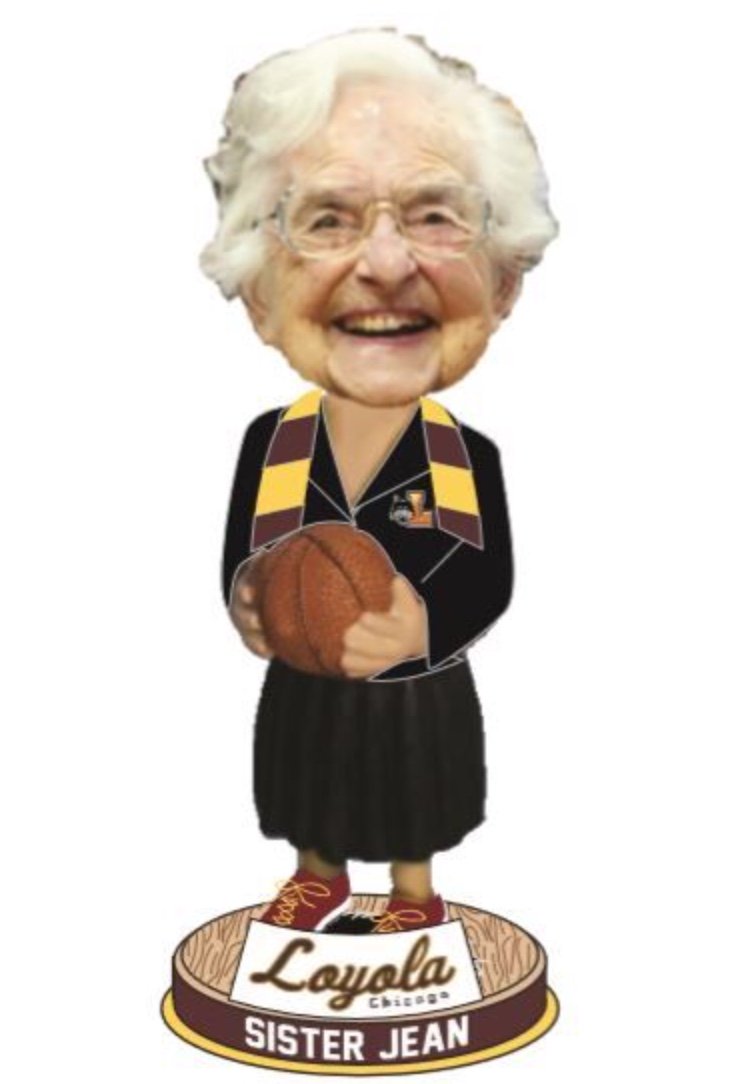 Sister Jean has finally made it.
She’s got a bobblehead.
We’re all done here.

A Clown is Running as a Democrat for Congress in South Carolina: Literally

Watch: Amazon Delivery Driver Shouts With Joy And Does Happy Dance After Getting…